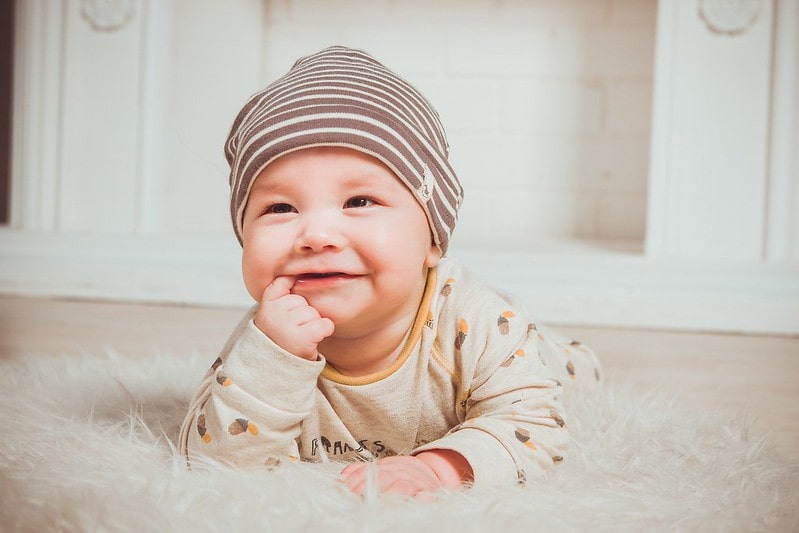 Babies and infants are unpredictable at the best of times, and understanding their non-verbal cues can be quite a task.

With their different moods, behaviours and changing habits, it can often be a challenge to figure out what they all mean. As the popular saying goes, ‘babies don’t come with a manual’, and it really is about trial and error!

A common behaviour, which can be baffling at times, is when babies start chewing on their hands. Once your newborn discovers their hands, this becomes a new ‘play’ thing to focus on. And experts suggest that putting hands or fists in the mouth is another step in self discovery, learning how they work and what they can do. Not to mention the endless dribbling caused by their favourite habit. This is all part of their sensory development.

However, excessive hand-chewing could also be a signal for other things. While this may be concerning for parents, your baby chewing on fingers is usually nothing to worry about. So, if you’re wondering about your baby’s fascination with ‘eating’ their hands, here are some useful answers to your questions!

Hunger Cues: Are They Hungry?

Around six to eight weeks old, a newborn sucking fingers could be a signal they are hungry. The first thing to do is to check whether they’re open to taking your breast milk or a bottle when offered. If they stop chewing their hands after their feed, then hunger was most likely the reason. Other possible hunger cues to look out for include, crying, smacking or licking their lips, or flailing their arms around. However, if they refuse food then it could mean other things.

A Whole New World: Are They Curious?

When babies suck on their hands or put objects in their mouths, it's often more about feeding their curiosity! By exploring objects with their mouths and tongues, this helps them learn more about their world, and what is in it. It also allows them to communicate their needs, develop preferences and current states of development.

Teething Time: Are They Getting Their Milk Teeth?

A common reason for babies chewing on their hands could be teething. Just before six months of age, their gums become tender in preparation for their first tooth eruption. This discomfort causes babies to suck on their hands, scratch their gums or bite down on different things. That’s the quickest way for your little one to find relief!

Other signs and symptoms of teething includes, increased drooling, swollen gums, fussiness, sleepless nights and loss of appetite. Typically, babies don't show signs of teething until about 4 to 7 months, but you might see your little one chewing on their hands much earlier.

Self-Soothing: Are They Seeking Comfort?

Babies might simply take comfort from chewing on their hands as a form of self-soothing. This often happens when they’re over-stimulated and need to calm down or falling asleep. Also, when they’re bored and have nothing to engage with, exploring their hands suddenly seems more appealing! Once again, this is no need to worry, and it’s a sign of healthy development.

Medical Issues: Do They Have Oral Thrush?

In rare cases, excessive hand chewing might be a sign of oral thrush. Thrush in newborns is when too much of a yeast called Candida albicans grows inside a baby's mouth. This bacteria and fungi naturally grows in our bodies, and our immune system helps to keep these germs at bay. But newborns and babies do not have fully formed immune systems. Other symptoms to look out for include a whitish sheen to their saliva, refusing to nurse, and creamy white spots or patches in the mouth and tongue. When this happens, you should contact your doctor who will advise on the best course of treatment for their age. It goes without saying that if you are ever concerned about your baby's health to seek medical advice immediately.

﻿Do I Need To Do Anything To Help?

Generally, chewing on hands is not a major cause of concern. But if you are worried when your baby shoves their fist into their mouth, you can try and swap it for a toy instead. This will entice your baby to grab it, meaning he/she will learn to take their hand out of their mouth. It’s probably best to opt for a soft toy that is washable and of course chewable! Other options include soothing teething rings, and ones which are filled with water can be chilled in the fridge. The cool water can help relieve sore teething gums, and keep your baby occupied.  There are also natural teething gels on the market that can numb their gums and help to relieve symptoms.

When Do Babies Usually Stop?

Every child is different, and will eventually learn to stop chewing their hands in their own time. Some infants may naturally move onto dummies or sucking their thumbs for comfort. If your baby seems quite happy and content chewing on their hands, you don’t have to take any action. In fact, you can usually take it as a healthy sign that they’re expressing curiosity and learning control over their own bodies!

When your child is around 18–24 months old, you may have an easier time trying to break this habit. But if you’re really concerned always seek medical advice from your practitioner.

In most cases though, it’s perfectly normal and your baby should grow out of it with time. Just be prepared for the drooling and mountain of wet clothes that comes with it!

Cynthia Lawrence is a freelance lifestyle journalist for national magazines. She lives in London with her 9-year-old son and hubby, and also has an unhealthy obsession for homes and interiors. She loves taking inspiration from her fabulous family travels and exciting adventures.