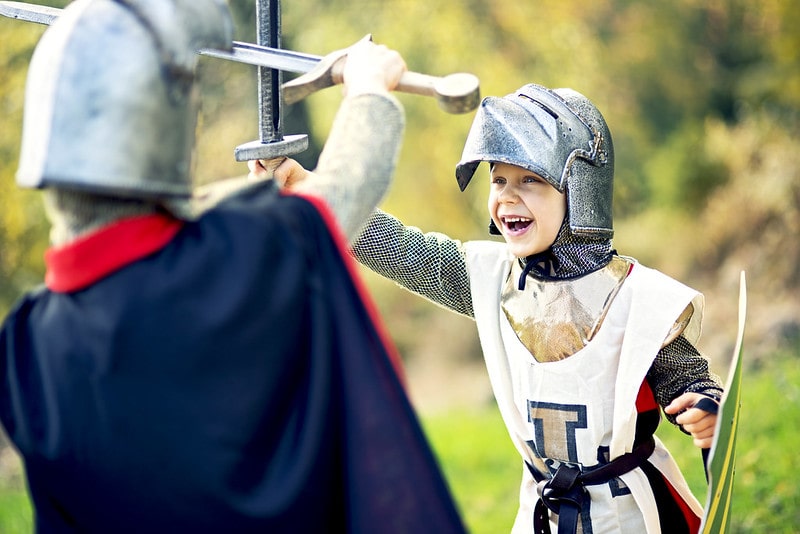 From what they ate to their grisly crime and punishment, the Anglo Saxons make for a fascinating history lesson. If your children are getting stuck into this period of horrible history and you want to know more or help them out, Kidadl are here to help with easy bite-size fact files.

Here's everything you need to know about Anglo Saxon shields.

All About The Anglo Saxons

The Anglo Saxons were people from the German regions of Angeln and Saxony, who settled in Britain after the fall of the Roman Empire in around 410 AD. The Anglo Saxon period lasted for over 600 years, from the original settlements in 410 all the way through to 1066, when Harold Godwinson was defeated by the Normans at the Battle of Hastings.

From blood feuds between families, to regular tribal warfare, it was a violent time so weaponry and armour were a must.

The shield was an extremely important piece of war equipment: in fact for most Anglo Saxon warriors, shields were the only piece of defensive equipment they had, and as combat was mostly face to face, a robust means of protecting the body was vital.

Anglo Saxon shields were generally a circular piece of wood made from planks which were glued together. In the middle of the shield, something called a 'boss' was attached. A shield boss was a round, conical or convex piece of material, such as iron or wood, which was welded to the shield using iron or bronze rivets, that was designed to deflect blows and provide a place to mount the shield's grip. As shields evolved in shape and sophistication, the boss was retained but became purely ornamental.

What Were Anglo Saxon Shields Made of?

Shields were often covered in leather, to help hold the glued planks together, and the leather was either dyed or painted. Although no painted Anglo Saxon shields have been found in England, painted shields from the same period have been found in Denmark and the epic poem Beowulf describes shields as being "bright" and "yellow." There is also evidence that other colours were used, like red, green, black and white, as well as different patterns, which may have signified which kingdom a warrior belonged to, like a coat of arms.

How Big Were Anglo Saxon Shields?

Smaller shields were lighter and easier to manoeuvre so were used in minor skirmishes, like issues within a tribe, and hand to hand combat. Larger shields were used in full scale battles, as they would have given better protection from projectiles, like spears, and were also needed to construct a shield wall.

Anglo Saxon armies were usually infantry-only and at the beginning of a battle, warriors from both sides would stand in a defensive formation known as a shield wall, where they stood close together and held up their shields in front of them. They could then throw spears from behind the wall and later both sides would move closer together until they crashed into each other for close up battles.

Chain mail is often referenced in literature of the time, although few examples have been discovered. The only complete Anglo Saxon chain mail armour, known as a 'mailcoat,' was found in the local cemetery in Sutton Hoo, Suffolk. It was badly damaged by corrosion, so it's widely assumed that this is the reason that more mailcoats haven't been found.

Despite the obvious benefit of protecting warriors heads from enemy blows, helmets weren't common in the early Anglo Saxon period. However, in 1008, Cnut the Great decreed that all warriors in active service must possess a helmet and, in the same year, Aethelred the Unready ordered the production of helmets.

If you want to bring everything you've learnt about the Anglo Saxons to life, why not try out these fun and engaging activities with the kids?

Design a shield. Encourage children to use their imaginations to decorate a large cardboard shield with colour and pattern. What do their choices say about their tribe?

Sculpt a boss. If you have some clay, or even Play-Doh, children can shape and sculpt a boss to adorn the middle of their shield.

Design a warrior. Give children a basic outline of a man, or they can draw their own, and get them to create a warrior from everything they've learned. What Anglo Saxon warrior clothing will he wear, what weapons will he carry?