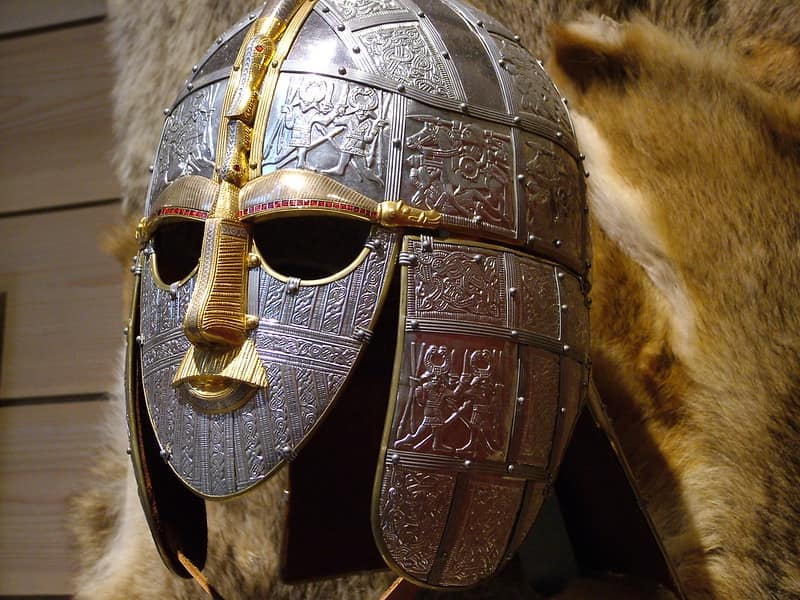 The famous Anglo-Saxons settled in England between 410AD and 1066AD. While here, they needed to work very hard every day - with no shops to buy from, everything was either grown or made.

Find out more about Anglo-Saxon jobs that Key Stage 2 children need to know about, and help them discover the way in which they shaped our society. Plus, you can learn some interesting facts about Anglo-Saxons along the way.

Who Were The Anglo-Saxons?

The Anglo-Saxons were a group of warriors and farmers from across the North Sea, who invaded England before settling there. They settled in England during the fifth century and ruled for around 300 years. The Romans had ended their rule of England in 410AD, leaving the country open to invasions by new rulers.

It is said that the Anglo-Saxons fled from their countries as rising ocean waters were limiting the amount of land they could live and grow crops on. Desperate to find somewhere else to live, they moved to what they called Angle-land (England) and established many kingdoms. They consisted of three tribes: the Angles, the Jutes and the Saxons. The largest tribes were the Angles and the Saxons, hence we know them collectively as the Anglo-Saxons.

It is believed that the Angles were Southern Danish, the Saxons German-Dutch and the Jutes, Northern Danish.

What Jobs Did Anglo-Saxons Have?

The Anglo-Saxons arrived in England a few years after the Romans left. Though the Roman towns and cities remained, the Anglo-Saxons preferred the rural countryside. The jobs that men, women and kids took up were to provide food to eat, shelters for living and activity, tools, and things to use in their leisure time.

Women were in charge of all things home-related, from cooking to crafting. Their jobs included:

-Craftwork, like dyeing clothes and making shoes from leather.

-Creating jewellery like beads, ornaments and brooches from gemstones, glass and gold to wear with, or secure their clothes.

Men worked together and took on a variety of roles:

-Woodworker - they loved working with wood!

-Making board-game pieces to play in the village.

What Jobs Did Anglo-Saxon Children Have?

The Anglo-Saxon village required all hands on deck, so even kids got involved! When they came to the age of ten, they were considered adults, so they began to take on adult roles and the adult way of life. Boys and girls had different jobs (like the men and women did): boys learned skills from their fathers and girls learned skills from their mothers.

-Herding cattle and sheep with their dogs (if they had them).

-Learning to chop trees from their fathers.

-Using a spear in battle.

-Picking plants to use to make dyes for their clothes.

What Will KS2 Children Learn About The Anglo-Saxons?

Key Stage 2 children start learning about the Anglo-Saxons in Britain from Year 3, then build on their knowledge as they progress to Year 6.

By the end of Key Stage 2, kids should have learnt some interesting Anglo-Saxon facts and gained a deeper insight into the development of the Britain we know today. They will learn about:

-When the Anglo-Saxons first settled in England, following the Romans' withdrawal in 410AD.

-Anglo-Saxon invasions, kingdoms and settlements (some of which still remain today).

-Village culture and art in the Anglo-Saxon period.

-The conversion of many Anglo-Saxons to Christianity.

-The struggle for England between the Anglo-Saxons and the Vikings, up until 1066.

-Laws and justice for people in the Anglo-Saxon period.

How Can Parents Help Learning About Anglo-Saxons?

To help kids get a better grasp of this history topic, with extra fun, why not try one (or all) of these activities?

-Weaving a scarf with yarn, using cardboard as a support. For more clothes ideas, why not try a mini tunic (it was very popular among  Anglo-Saxon people in Britain).

-Learn how to write your name in Anglo-Saxon runes (letters).

-Write a secret message to a friend in runes taken from the Futhorc (their alphabet).

-Learn the Anglo-Saxon days of the week.

-Build an Anglo-Saxon house out of wood (just as they would have done). Instead of chopping, get some cardboard boxes, PVA glue, scissors, lollipop sticks and straw. Use one cardboard box to form the base and walls of your house, then cut and glue more cardboard on for the roof. Use lollipop sticks to support any areas and make the house stand nice and tall. To make your house look more authentic, add some straw!