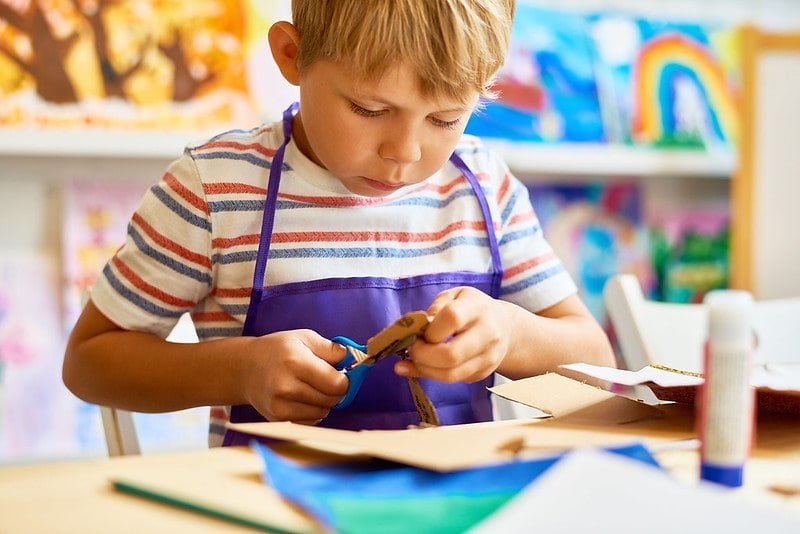 We know Anglo-Saxons as warriors and farmers from countries around the North Sea, who invaded and settled in England, but they were super creative too.

They arrived in the fifth century and ruled for around 300 years, though their era ended around 1066AD. The Romans had ended their rule of England in 410AD, leaving the country open to invasions by new rulers.

Rising ocean waters were threatening their livelihoods, so the Angles, Saxons and Jutes decided to migrate. Desperate to find somewhere else to live, they moved to what they called Angle-land (England) and established several kingdoms. The largest tribes were the Angles and the Saxons, hence we know them collectively as the Anglo-Saxons. The Angles were said to be Southern Danish, the Saxons German-Dutch and the Jutes, Northern Danish.

What Types Of Art Did They Create?

The Anglo-Saxons were multi-talented, and art was one of their talents. Their art was a form of cultural expression, made by the people for the people. The art wasn't aimed at anyone, nor was it commissioned, it just made everything look nice and was super fun to make!

Skilled craft workers, they loved working with materials like metal, glass, gold, and gems. Anglo-Saxon crafts required these materials to make a variety of objects, from jewellery to wall paintings. Their 600-year stay in England also saw an evolution of their style. Here are some of the types of art they created:

The handwritten books made by the Anglo-Saxons were illuminated with Anglo-Saxon patterns, illustrations and other designs. Sophisticated and detailed, this art form inspired many others across Northern Europe. Battles and invasions following the departure of the Anglo-Saxons meant that few survived today, and those that do were mostly found at Sutton Hoo, a huge Anglo-Saxon burial site in Suffolk, eastern England.

The Anglo-Saxons were fortunate to have a variety of resources at their disposal, and metal was their preferred material of choice. They could make armour, household items and tools with it. They hammered the metal and engraved it, with a variety of swirling patterns and illustrations of animals at times. To represent animal fur, the metal would have lots of dots and dashes on put on. Sometimes, Anglo-Saxons even used gems to further adorn their metalwork, as well as a material called niello, for lettering and symbols. Notable artefacts include the Great Buckle and the intricately engraved helmets found at Sutton Hoo.

A lot of time and effort was put into the making of Anglo-Saxon jewellery. They made beads, gold ornaments and brooches. Both men and women wore brooches and they weren't just pretty, they were useful: they could secure their clothing like a safety pin. Notable artefacts include the Alfred Jewel: a remarkable jewel made from gold, enamel and quartz. It was initially made for the King of Wessex, Alfred the Great, and even has an engraving on it to say so!

Textile crafts were widely engaged in during the Anglo-Saxon period, though few have survived to be appreciated today. Textile art was primarily expressed through weaving, using wool and linen to tell stories and record important moments in history. Notable artefacts include the very famous Bayeux Tapestry, woven from wool. The stunning and valuable tapestry made in England details the history of the latter part of the Anglo-Saxon period, and is over 68 metres long and half a metre wide.

Walrus tusks and whale bones were frequently obtained for ivory, which were used to create ornaments and objects like caskets. Notable artefacts include Frank's Casket, a decorated box with carved images of Roman and Biblical history, carved from whalebone!

Carving of stones was often done next to churches, and was often of crosses. Intricate too, as you might expect, though the carving on remaining artefacts has faded quite a lot since. They also sculpted monuments and painted on walls in bright colours.

With spectacular skills working with metal and carving, it's no surprise the Anglo-Saxon art ideas for making extended to musical instruments, evident in the adornment of their lyres, harps and flutes.

How Can Parents Help With Learning About Anglo-Saxon Art?

KS2 children are introduced to the Anglo-Saxons in Britain from Year 3, then build on their knowledge up to Year 6. They will learn about Anglo-Saxon art as they explore village life and village culture in the Anglo-Saxon period.

People have been drawing inspiration from Anglo-Saxon art for centuries now, for its detail and sheer skill. Why not create some art in the style of the Anglo Saxons? Here are some handy ideas for some activities KS2 children can get involved in:

Get Carving: Grab some Play-Doh and carve a lovely decorative Saxon art sign to hang in the house. Or, make use of materials at home and use salt dough!

DIY Manuscripts: Think of a special memory and create a manuscript to preserve it. Remember to decorate and illustrate it!

Weave Away: All you'll need are some yarn and cardboard - why not ask children to weave in a colour that makes them think of Anglo-Saxon Britain?

Paint Paint Paint: Whether the children paint on walls will be up to you, but they could come up with ideas of an Anglo-Saxon-style painting, then paint it on paper to be hung on a wall!

Make A Brooch: Anglo-Saxon brooches that children can make themselves sounds like great fun. They can wear it, make some for friends and share their knowledge in the process.

Make A Necklace: Children will love making necklaces with clear beads (to resemble glass) and string. If you've got some jewels lying around, make use of those too in your jewellery, as Saxon art was often quite colourful!