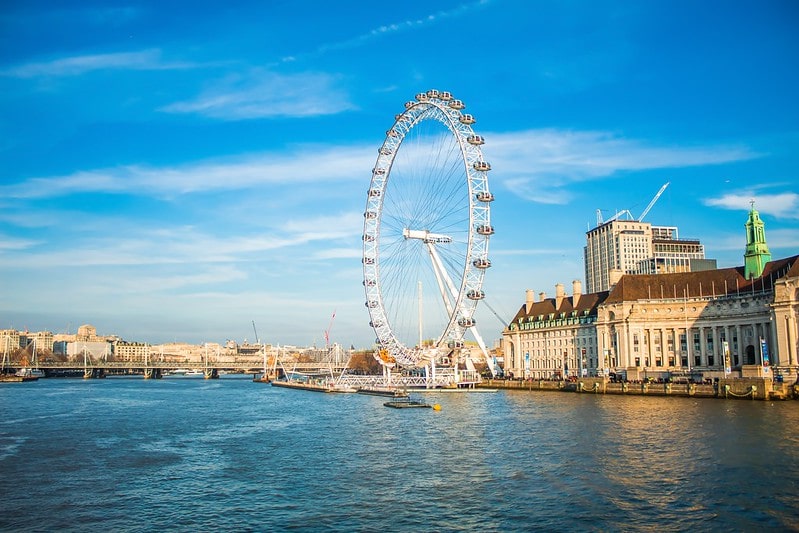 Ever wondered how tall the London Eye is? How fast it goes or why it was built in the first place? We've uncovered every exciting fun fact about this amazing great wheel, including the little detail that it's not actually even a Ferris wheel.

With these fun facts, your child will be the one who knows all the answers when questions about the London Eye come up! Just read on to learn all about this gem of the South Bank.

1.The London Eye was designed by Marks Barfield Architects, the company of husband and wife team David Marks and Julia Barfield, but its parts were built all over Europe. The components for the wheel were made in the Netherlands, the cables came from Italy, the bearings from Germany, while the spindles and hub were created in the Czech Republic. They all came together in London to be built into the Eye!

2.It was created as part of the Millennium celebrations and, like the Eiffel Tower in Paris, was originally meant to be in place only temporarily, with a lifespan of roughly five years.

3.It's not London's first big wheel. That honour belongs to The Great Wheel, which took pride of place at the Empire of India Exhibition in Earl's Court. That Ferris wheel was 94 metres high, with 40 cars, each of which could carry 40 people. It opened in 1895 and closed in 1906.

5.It took seven years to build.

6.The London Eye cost an eye-watering £75 million from idea to finished wheel.

7.It was originally called the Millennium Wheel, but had a name change to the London Eye in 2011. In fact, it's had a number of names over the years, depending on which corporation is currently sponsoring it, including British Airways London Eye, Merlin Entertainments London Eye, EDF Energy London Eye and its current full name, which is Coca-Cola London Eye.

8.The London Eye was built in sections, that were floated down the river Thames on barges to its home. This is located on a stretch of land that mostly belongs to the London borough of Lambeth, though one of the legs of the London Eye stands on London's South Bank.

9.The sections were assembled on platforms in the river and, when the observation wheel was complete, the whole thing was lifted into position alongside the River Thames.

10.Although people refer to the London Eye as a Ferris wheel, did you know it doesn't fit the technical description to be called one? It's actually a cantilevered observation wheel, because the way it was constructed means it is held in position by an A-frame on one side only, as opposed to a Ferris wheel, which is supported on both sides.

11.The London Eye has 32 capsules or 'pods', all air-conditioned, (which means there are as many pods as there are London boroughs!).

13.The pods weigh ten tonnes each.

14.Each London Eye pod can take up to 25 people, which adds up to 800 passengers maximum per rotation – the same amount of people that 11 double-decker buses can carry if they're full.

15.There is seating inside the pods, but passengers are free to move around.

16.The London Eye wheel moves at the rate of 0.9 kilometres per hour (0.6 miles per hour), which is 26 centimetres (10 inches) per second. During working hours, which is from 10am to as late as 8.30pm, the wheel never stops moving unless it is to give a disabled or elderly visitor more time to get on.

17.It takes about half an hour to go all the way around the London Eye.

18.Each paid-for ticket (current prices are £27 per adult, £22 for children aged between 3 and 15 if booked online, while under threes ride for free) buys one rotation.

19.When it opened in 2000, the Millennium Wheel, or London Eye, was the tallest wheel in the world. It has since been overtaken by three other wheels, including the current tallest Ferris wheel, called the High Roller, which is in Las Vegas, USA, and is a whopping 167.6 metres (550 feet) high. However, at 135 metres (443 feet), the London Eye remains the tallest cantilevered observation wheel in the world.

21.The Millennium Wheel was officially opened by then British prime minister Tony Blair on 31 December 1999, but didn't open to the public until 9 March 2000 due to a mechanical glitch.

22.Over 3.75 million people ride the London Eye every year, making it the most visited paid-for attraction in the United Kingdom. It's pipped to the post as the most-visited attraction in the country by the British Museum, with 6 million visitors (and counting!) per year.

23.When the skies are clear, you can see up to 40 kilometres (25 miles) from the top of the wheel. That's a view that will let you see right out of the capital and all the way to Windsor Castle!

24. The London Eye is a celebrity magnet: Model Kate Moss is said to have visited 25 times, American actress Jessica Alba 31 times, while Matt Damon and singer Meghan Trainor are both alleged to have gone up five times each.

26.The Duke and Duchess of Cambridge, along with their son, Prince George, were the first members of the Royal family to ride the London Eye back in October 2016.

27.The lights of the wheel can be tailored to different events. For instance, to celebrate the wedding of Prince William and Kate Middleton, it was lit up with the colours of the Union Jack, and when Coca-Cola started sponsoring it, it was lit up in red.

Note: The London Eye is currently closed due to the COVID-19 virus. However, the great minds behind this fantastic attraction are working hard to make it a safe experience going forward and it will re-open as soon as they've put all their clever ideas into practice.