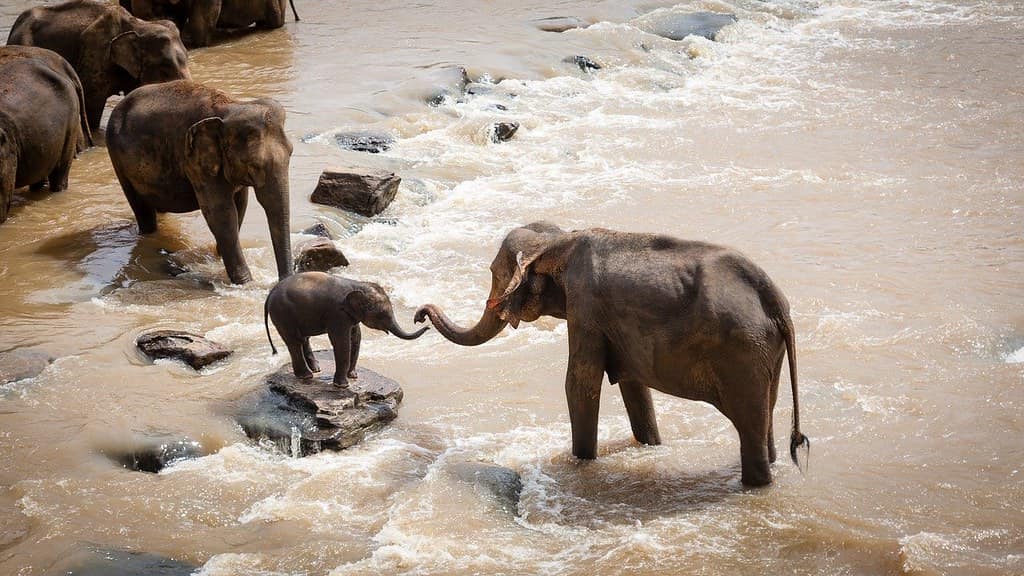 The two species of African elephant are special and oh so interesting! Yes, we've seen our fair share of cartoon and illustrated elephants (Dumbo and Elmer The Patchwork Elephant for example) but how much do we know about these huge mammals?

Let Kidadl inform you! By the end of this blog packed with amazing facts, kids will be full of knowledge to share with friends and appreciate these animals more. With lots of ways to learn about animals such as elephants, you've picked the best place to start.

Find out about elephant tusks, elephant weight, the elephant lifespan, and much more!

1) African elephants can weigh between 2200 kilograms and 6350 kilograms.

2) African elephants can grow up to three metres tall, from the ground to their shoulder.

3) African elephants are the largest land animals on Earth. They have huge ears which have a shape like the continent of Africa itself.

4) In the dry season, African elephants use their tusks to dig for water. In creating holes to reach dry riverbeds, the watering holes made provide water for other animals to drink from too.

5) African elephants can live up to 70 years.

7) Elephants have excellent memories. The part of their brains that remembers things is larger than that in humans!

8) An elephant's trunk can be between 180cm and 214cm long. The African elephant's trunk is an extended upper-lip and nose. They have two bits on their trunks which look like fingers, which they use to grab small things.

9) An African elephant also uses its trunk to smell things, breathe, and trumpet. The trunk can detect vibrations, suck water and gently stroke. It can even lift a feather!

11) African Forest elephants and African Savannah elephants have very large ears. They flap their large ears in certain ways when they're angry or happy. Their large ears also enable them to hear the calls of other elephants from far away.

13) Male and female African elephants have long, pointy tusks, which are incisor teeth. These tusks keep growing - even as adults. These tusks help them dig for food and water, as well as removing tree bark to eat.

14) Male African elephants have larger tusks than females, and enjoy battling one another with their tusks.

15) An African elephant's tusks can be around 2 metres long.

16) Their brains can weigh between 4 kilograms and 6 kilograms.

Ever wondered about the behaviour of elephants among the rest of the animal kingdom? Find out here!

19) A group of elephants is called a herd.

21) African elephants sleep lying down or leaning against a tree.

22) When eating, African Forest elephants leave gaps in the plants that they eat. The space left in bushes and trees creates little paths for small animals to move through.

23) In the savannahs (grassy areas in very warm areas, with few trees and little else around) African Savannah elephants uproot whole trees (take trees completely out of the ground, with their roots too) and they eat saplings (young trees with thin trunks). Doing this creates space for animals like zebras (who prefer open spaces to crowded places) to enjoy.

25) African elephants don't sleep long, only up to five hours.

27) An African elephant can detect a thunderstorm from 280km away and head towards it, looking for water. They're not afraid!

28) Elephants can recognise their reflections in mirrors - they are very clever. Along with humans and apes, they are considered to be the most intelligent animals.

29) Elephants can run faster than humans, running up to 18 metres per second.

30) African elephants can be dangerous, but most times they're pleasant and peaceful. The bulls (males), however, can be aggressive and dangerous when competing for cows (females).

31) Sometimes elephants use their ears to communicate! Their ears flap in certain ways to signal to fellow elephants, as well as make specific rumbling noises.

32) Elephant herds are led by the biggest and oldest female.

33) This female will lead other females and the young, while the males often roam solo, or occasionally with small groups of other males.

Like us humans, African elephant species' get hungry too. Find out all about their diets here.

34) African elephants are herbivores, so they only eat plants, no meat.

35) African elephant dung (poo) contains lots of seeds. As the African elephants walk around and poo along the way, these seeds get deposited, helping plants to grow in different areas.

37) An adult elephant can eat up to 136 kilograms of food in one day. This could be plant roots, grasses, tree bark, or fruit.

African elephants have homes - while they may not buildings, there are large areas that they dwell in, called their habitats.

38) You can find African elephants roaming between the Sahel region of Mali (Africa), the rainforests of central and West Africa and the Savannahs of sub-Saharan Africa.

There are many national parks in these areas, such as the Mount Elgon National Park in Kenya, East Africa.

Elephant populations have been declining over the past few years, and conservation efforts are being made to protect them from extinction.

39) African Elephants are not endangered, but they are vulnerable to extinction, which means we could run out of elephants in the future if we don't look after them.

40) A lot of African elephants from both species are being captured and killed so that their tusks can be cut off and used to make ivory, a hard white substance used to make things, like ornaments. This illegal hunting and killing is called poaching. Poaching in many places for the ivory trade is a big problem.

41) Also, forests are being destroyed as more land is covered with concrete to expand cities for people to live in, which makes it hard for elephants to find food.

They may be babies. but these elephants are not little - find out more about baby elephants below!

42) A baby elephant is called a calf.

45) An elephant calf can weigh around 91 kilograms when it's born.

46) A baby elephant and mother elephant can use their trunks to communicate with each other.

And that's that for our facts about African elephants! With your new knowledge, why not try a fun, elephant-inspired activity too?